Between 9th – 15th of January 2017 I baked 3 hours everyday, from conversations I created daily documentary texts.

The 12th Text is featured in A5 contemporary art magazine – April 2017 Issue.

Please don’t eat all the cakes,

Save some for me.

This is your thing, tea, a little bit of,

Are these to eat? Black with nothing,

Do people enjoy the cakes?

A party, we’re having a party, I like us waking up to you making breakfast.

You washed it, when cooking, my favourite part,

The last time I baked I was sent home with a burnt arm.

I love to wake up to your smell, your baking smell,

Matthew, can I ask you something,

I think the trick is to make the dough as thick as possible, 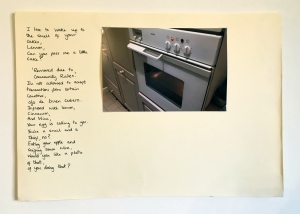 I love to wake up to the smell of your cakes,

Can you pass me a little cake?

‘Removed due to Community Rules’.

Your egg is calling to you.

You’re a snail and a thief, no?

Eating your apple and sniffing some wine,

Would you like a photo of that, of you doing that?

Are you making coffee buns? You know,

There’s a lot of rum from last night.

Can I make an intervention and add chocolate?

You do it freestyle.

I like that, I shall take a photo of you later.

Where did the flavour go? The oven took it all away.

So different to before, the smell of the lime.

Matthew, can I turn the oven off?

Matthew, when are you starting?

Are you the duvet guy?

And the cake guy, my favourite.

My grandmother used a tooth pick,

They flew, where are the rest?

One off cakes, limited edition work,

I’m pretty sure we ate dog.

Why are you baking? Because you are nice?

I’m drinking from the glass of everybody.

I went for breakfast at the hotel to get here for 9,

You’re not very good at baking cakes by the look of it.

It had been raining, I’ve missed you so much.

My friend Juliette, I told her I was coming here, her nephew said

“Do you do this all the time”,

I don’t have the time.

You know a lot of people,

I know a lot of people,

We know a lot of people,

And she gave me this box of stuff.

My son enjoyed the cakes.